Street art is everywhere and our eyes have become so accustomed to it that we tend to take it for granted. But the incredible recycled art creations by Bordalo II, the artist known for creating beauty out of trash, are just impossible to ignore.
This incredibly talented Portuguese artist is taking traditional street art to a whole new level, using trash ingeniously to create marvelous urban sculptures. However, his art is not about the final product but rather the idea behind it, which is raising awareness of the vulnerability of our planet. Abandoned buildings and old neighborhoods serve as canvases for his large-scale street art pieces and creative assemblages. He gives a second life to old tires, damaged car bumpers, busted appliances and any other man-made garbage he can find in junkyards or old factories, by turning them into striking works of art.

Artemperature already wrote about sculptures made by trash.

From foxes to pelicans and rodents, animals are the main subject of Bordalo II’s art. They are often depicted with big eyes that seem to give a stark warning as they stare at passers-by. By representing nature and its creatures using the very same materials that are causing their destruction, the artist is bringing to our face what might die if we don’t put a stop to this uncontrolled production of waste. This is not just a powerful message, but also a great example of the underlying purpose of street art. With his sculptures, Bordalo II is drawing more and more attention to the enormous amount of waste our consumerist society produces every day and the long-term consequences this has on the planet.

His beautiful artworks decorate the streets of his hometown, Lisbon, which was one of the first cities in the world to establish a legal framework for street artists. They can be found also in many other cities around the globe, including Paris, Berlin, Baku, and Las Vegas. One of his masterpieces is called the “Owl Eyes” and it’s a colourful owl sculpture created in the city of Covilhã using tractor tires, various metal pieces, and other bits of urban trash. Other beautiful pieces include “Big Racoon”, a four-meter high installation in the riverside district of Belém, and “Half Rabbit”, a giant rabbit sculpture realized in Vila Nova de Gaia. 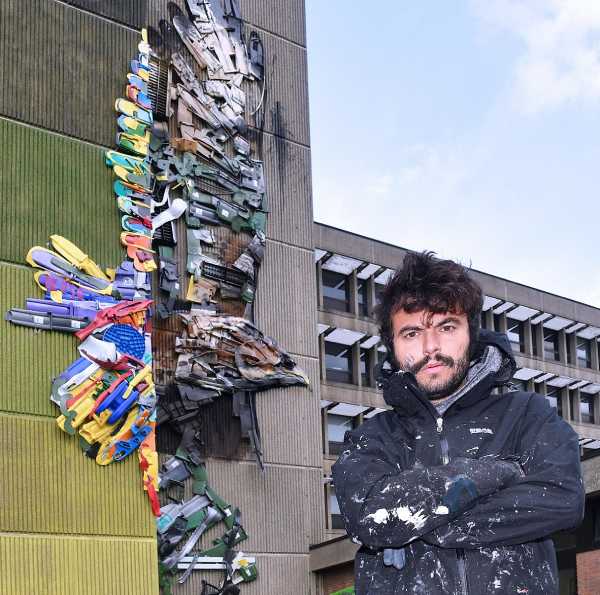 Bordalo II, whose real name is Artur, was born in Lisbon in 1987 and approached art as a little kid while watching his grandfather, the famous watercolour painter Real Bordalo, at work in his studio. He studied painting at the Faculty of Fine Arts in Lisbon and started his career as a traditional street artist, but his creativity evolved in parallel to his growing concerns for the environment. Little by little, he came up with this innovative form of recycled art and now he’s a master at creating beauty out of trash. His unique approach never fails to amaze and succeeds where many have failed in engaging locals in an open and honest dialogue about the damages that our unsustainable behaviors are producing on the whole ecosystem.
Read the article about 10 Trash Animal Artworks
Share this post
Share on FacebookShare on Facebook TweetShare on Twitter Pin itShare on Pinterest Share on WhatsAppShare on WhatsApp
Go to Top