American film director Rachel Grady once said: “Always put yourself in others’ shoes. If you feel that it hurts you, it probably hurts the other person, too.” Syrian artist Abdalla Al Omari must have thought something similar when he started to work on his amazing project titled The Vulnerability Series, a collection of portraits depicting world leaders as refugees in a moment of despair.

From North Korean leader Kim Jong-un represented as a shy boy hiding a toy plane behind his back to Us President Donald Trump painted with a child in his arms as he carries a backpack and belongings, the Syrian artist portrays world leaders as displaced civilians and starving refugees to investigate how much greatness they would still be able to demonstrate after being stripped of all their power and money.

It took Al Omari 19 months to complete this project, which consists of large portraits on canvas and a short video. The strength of his paintings lies in their great realism, as seen for example in The Queue, showing a long line of refugees waiting for food, including former US Barack Obama, Russian leader Vladimir Putin, and Israeli Prime Minister Benjamin Netanyahu. Another incredible artwork from this series is The Boat, where Al Omari placed world leaders on a wooden boat full of refugees in search of a better future. 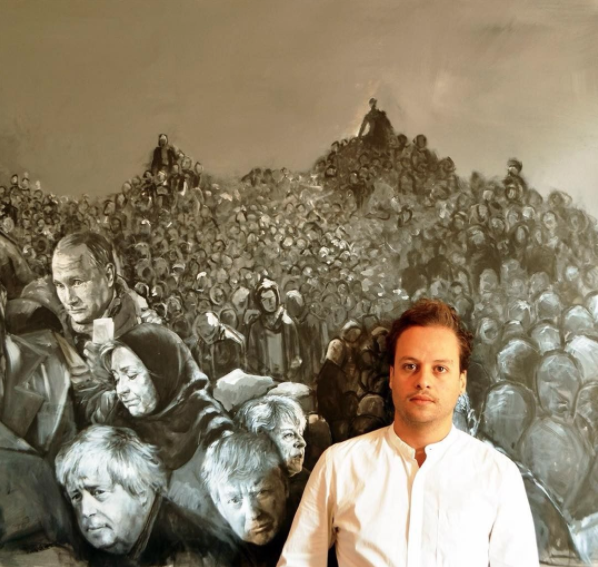 Born in the Syrian capital of Damascus in 1986, Al Omari graduated in English literature and was forced to leave his country in 2012, shortly after the outbreak of the war in his country. In 2014 he was granted asylum in Brussels and that’s when he started this project. Because of this war, millions of Syrians like him had been forced to leave their homeland, with many children suffering from mental health issues, and he reversed all his anger and frustration on his paintings.

Choosing to portray the leaders who were partly involved in the Syrian war in such conditions was his “sweet revenge”. He wanted to strip them out of their power and put them exactly in the same position he had found himself when he was forced to leave his country. He also secretly hoped that they might think and act differently after seeing the paintings. But then his aim slowly shifted from personal pain to the desire of challenging the standard concept of power and giving back to those leaders their humanity and vulnerability.

In addition to The Vulnerability Series, Al Omari, who studied Visual Arts at the University of Damascus, usually portrays victims of the civil war in Syria and creates also videos. Clearly trying to trigger public debate with his work, he shows that in a world where fear of what is different or unknown makes us more aggressive, art can be a powerful medium to instill values, urging us to think a bit differently about the world around us. His portraits, which totally subverted standard refugee paintings, have been exhibited in Dubai.

Further details about Al Omari’s art are available on the artist’s website.